Before learning about subatomic particles, some basic properties should be understood.

The amount of charge a particle has is measured in coulombs, but it is more conveniently expressed in terms of an integer. For instance, a helium ion that has 2 less electrons than usual has a charge of +2, and a bromide ion with one more electron than usual has a charge of -1. (This may seem backwards, but remember that an electron has a negative charge.) Notice that charge not only applies to subatomic particles, but also ions and other things as well. Always remember to specify if a charge is positive or negative. Unlike ordinary numbers, we always write the plus sign for positive charges to avoid confusion with a negative charge.

Mass is the measure of inertia. From a subatomic point of view, mass can also be understood in terms of energy, but that does not concern us when dealing with chemistry. Mass for particles, atoms, and molecules is not measured in grams, as with ordinary substances. Instead, it is measured in atomic mass units, or amu. For more information about mass and amu, read the previous chapters on properties of matter. 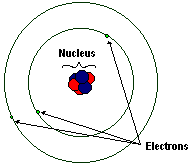 At the center of each atom lies the nucleus. It is incredibly small: if you were to take the average atom (itself miniscule in size) and expand it to the size of a football stadium, then the nucleus would be about the size of a marble. It is, however, astoundingly dense: despite the tiny percentage of the atom's volume it contains nearly all of the atom's mass. The nucleus almost never changes under normal conditions, remaining constant throughout chemical reactions. Nuclei are themselves made up of a pair of smaller and more dense particles, the proton and the neutron. These particles are collectively dubbed nucleons.

Protons have a charge of +1 and a mass of 1 amu. They are often represented by a Failed to parse (MathML with SVG or PNG fallback (recommended for modern browsers and accessibility tools): Invalid response ("Math extension cannot connect to Restbase.") from server "https://en.wikipedia.org/api/rest_v1/":): {\displaystyle p} .

Neutrons have no charge and a mass of 1 amu. A neutron is slightly heavier than a proton, but the difference is insignificant. Neutrons are often written Failed to parse (MathML with SVG or PNG fallback (recommended for modern browsers and accessibility tools): Invalid response ("Math extension cannot connect to Restbase.") from server "https://en.wikipedia.org/api/rest_v1/":): {\displaystyle n} .

Our friends the physicists say that neutrons and protons are made of even smaller particles called quarks. Fortunately, we don't need to know about that because quarks do not affect chemistry. Instead, quarks fall in the field of Quantum Mechanics.

Unlike the protons, neutrons cannot exist outside the nucleus indefinitely as they become unstable and break down. Within one nucleus there can be many protons and neutrons all in close proximity to one another. The number of neutrons in a nucleus ranges from zero to over a hundred.

You may wonder why neutrons exist. They have no charge, so can they do anything? The answer is yes—neutrons are very important. Remember that opposites attract and likes repel. If so, then how can several protons stay clumped together in the dense nucleus of an atom? It would seem as if the protons would repel and scatter the nucleus. However, there is a strong nuclear force that holds the nucleus together. This incredible force causes nucleons to attract each other with much greater strength than the electric force can repel them, but only over extremely short distances.

A delicate balance exists between the number of protons and neutrons. Protons, which are attracted to one another via the strong force but simultaneously repelled by their electromagnetic charges, cannot exist in great numbers within the nucleus without the stabilizing action of neutrons, which are attracted via the strong force but are not charged. Conversely, neutrons lend their inherent instability to the nucleus and too many will destabilize it.

Lastly, neutrons are very important in nuclear reactions, such as those used in power plants. Neutrons act like a bullet that can split an atom's nucleus. Because they have no charge, neutrons are neither attracted nor repelled by atoms and ions.

Surrounding the dense nucleus is a cloud of electrons. Electrons have a charge of -1 and a mass of 0 amu. That does not mean they are massless. Electrons do have mass, but it is so small that it has no effect on the overall mass of an atom. An electron has approximately 1/1800 the mass of a proton or neutron. Electrons are written Failed to parse (MathML with SVG or PNG fallback (recommended for modern browsers and accessibility tools): Invalid response ("Math extension cannot connect to Restbase.") from server "https://en.wikipedia.org/api/rest_v1/":): {\displaystyle e^-} .

Electrons orbit the outside of a nucleus, unaffected by the strong nuclear force. They define the chemical properties of an atom because virtually every chemical reaction deals with the interaction or exchange of the outer electrons of atoms and molecules.

Electrons are attracted to the nucleus of an atom because they are negative and the nucleus (being made of protons and neutrons) is positive. Opposites attract. However, electrons don't fall into the nucleus. They orbit around it at specific distances because the electrons have a certain amount of energy. That energy prevents them from getting too close, as they must maintain a specific speed and distance. Changes in the energy levels of electrons cause different phenomena such as spectral lines, the color of substances, and the creation of ions (atoms with missing or extra electrons).

Valence electrons (the outermost electrons) are responsible for an atom's behavior in chemical bonds. The core electrons are all of the electrons not in the outermost shell, and they rarely get involved. An atom will attempt to fill its valence shell. This occurs when an atom has eight valence electrons (as explained in the next chapter), so atoms will undergo chemical bonds to either share, give, or take the electrons it needs. Sodium, for example, is very likely to give up its one valence electron, so that its outer shell is empty (the shell underneath it is full). Chlorine is very likely to take an electron because it has seven and wants eight. When sodium and chlorine are mixed, they exchange electrons and create sodium chloride (table salt). As a result, both elements have full valence shells, and a very stable compound is formed.