When atoms move closer, their orbitals change shape, letting off energy. However, there is a limit to how close the atoms get to each other—too close, and the nuclei repel each other.

One way to think of this is a ball rolling down into a valley. It will settle at the lowest point. As a result of this potential energy "valley", there is a specific bond length for each type of bond. Also, there is a specific amount of energy, measured in kilojoules per mole (kJ/mol) that is required to break the bonds in one mole of the substance. Stronger bonds have a shorter bond length and a greater bond energy.

One useful model of covalent bonding is called the Valence Bond model. It states that covalent bonds form when atoms share electrons with each other in order to complete their valence (outer) electron shells. They are mainly formed between non-metals.

An example of a covalently bonded substance is hydrogen gas (H2). A hydrogen atom on its own has one electron—it needs two to complete its valence shell. When two hydrogen atoms bond, each one shares its electron with the other so that the electrons move about both atoms instead of just one. Both atoms now have access to two electrons: they become a stable H2 molecule joined by a single covalent bond.

Diagram of a covalent bond between hydrogen atoms

Covalent bonds can also form between other non-metals, for example chlorine. A chlorine atom has 7 electrons in its valence shell—it needs 8 to complete it. Two chlorine atoms can share 1 electron each to form a single covalent bond. They become a Cl2 molecule.

Oxygen can also form covalent bonds, however, it needs a further 2 electrons to complete its valence shell (it has 6). Two oxygen atoms must share 2 electrons each to complete each other's shells, making a total of 4 shared electrons. Because twice as many electrons are shared, this is called a 'double covalent bond'. Double bonds are much stronger than single bonds, so the bond length is shorter and the bond energy is higher.

Furthermore, nitrogen has 5 valence electrons (it needs a further 3). Two nitrogen atoms can share 3 electrons each to make a N2 molecule joined by a 'triple covalent bond'. Triple bonds are stronger than double bonds. They have the shortest bond lengths and highest bond energies.

Carbon, contrary to the trend, does not share four electrons to make a quadruple bond. The reason for this is that the fourth pair of electrons in carbon cannot physically move close enough to be shared. The valence bond model explains this by considering the orbitals involved.

Recall that electrons orbit the nucleus within a cloud of electron density (orbitals). The valence bond model works on the principle that orbitals on different atoms must overlap to form a bond. There are several different ways that the orbitals can overlap, forming several distinct kinds of covalent bonds.

The first and simplest kind of overlap is when two s orbitals come together. It is called a sigma bond (sigma, or σ, is the Greek equivalent of 's'). Sigma bonds can also form between two p orbitals that lie pointing towards each other. Whenever you see a single covalent bond, it exists as a sigma bond. When two atoms are joined by a sigma bond, they are held close to each other, but they are free to rotate like beads on a string.

The electron density is in between the two atoms in an σ bond.

The second, and equally important kind of overlap is between two parallel p orbitals. Instead of overlapping head-to-head (as in the sigma bond), they join side-to-side, forming two areas of electron density above and below the molecule. This type of overlap is referred to as a pi (π, from the Greek equivalent of p) bond. Whenever you see a double or triple covalent bond, it exists as one sigma bond and one or two pi bonds. Due to the side-by-side overlap of a pi bond, there is no way the atoms can twist around each other as in a sigma bond. Pi bonds give the molecule a rigid shape. 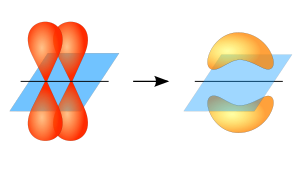 The electron density lies above and below the atoms in a π bond.

Consider a molecule of methane: a carbon atom attached to four hydrogen atoms. Each atom is satisfying the octet rule, and each bond is a single covalent bond.

Now look at the electron configuration of carbon: 1s22s22p2. In its valence shell, it has two s electrons and two p electrons. It would not be possible for the four electrons to make equal bonds with the four hydrogen atoms (each of which has one s electron). We know, by measuring bond length and bond energy, that the four bonds in methane are equal, yet carbon has electrons in two different orbitals, which should overlap with the hydrogen 1s orbital in different ways.

To solve the problem, hybridization occurs. Instead of a s orbital and three p orbital, the orbitals mix, to form four orbitals, each with 25% s character and 75% p character. These hybrid orbitals are called sp3 orbitals, and they are identical. Observe:

Now these orbitals can overlap with hydrogen 1s orbitals to form four equal bonds. Hybridization may involve d orbitals in the atoms that have them, allowing up to a sp3d2 hybridization.

Exercise for the reader

Predict the hybridized electron configuration of carbon in ethene. How many sigma bonds are there? How many pi bonds?