As the result of many different scientists and experiments, several gas laws have been discovered. These laws relate the various state variables of a gas.

State Variables of a Gas

These gas laws can be used to compare two different gases, or determine the properties of a gas after one of its state variables have changed.

When Avogadro's Law is considered, all four state variables can be combined into one equation. Furthermore, the "constant" that is used in the above gas laws becomes the Universal Gas Constant (R).

To better understand the Ideal Gas Law, you should first see how it is derived from the above gas laws.

There are three ways of writing the ideal gas law, but all of them are simply algebraic rearrangements of each other.

The Kinetic Molecular Theory attempts to explain the gas laws. It describes the behavior of microscopic gas molecules to explain the macroscopic behavior of gases. According to this theory, an ideal gas is composed of continually moving molecules of negligible volume. The molecules move in straight lines unless they collide into each other or the walls of their container.

The gas laws are now explained by the microscopic behavior of gas molecules:

Deviations from the Ideal Gas Law

In an ideal gas, there are no intermolecular attractions, and the volume of the gas particles is negligible. However, there is no real gas that can perfectly fits this behavior, so the Ideal Gas Law only approximates the behavior of gases. This approximation is very good at high temperatures and low pressures.

At high temperature the molecules have high kinetic energy, so intermolecular attractions are minimized. At low pressure the gas occupies more volume, making the size of the individual molecules negligible. These two factors make the gas behave ideally.

At low temperature or high pressure, the size of the individual molecules and intermolecular attractions becomes significant, and the ideal gas approximation becomes inaccurate.

A eudiometer is a device that measures the downward displacement of a gas. The apparatus for this procedure involves an inverted container or jar filled with water and submerged in a water basin. The lid of the jar has an opening for a tube through which the gas to be collected can pass. As the gas enters the inverted container, it forces water to leave the jar (displacing it downward). To fill the entire container with gas, there must enough gas pumped into the container to expel all of the water. 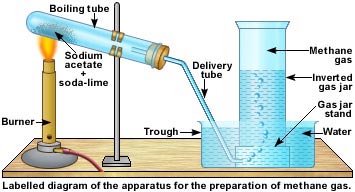 Gas is created by burning a substance that releases methane. The eudiometer on the right was full of water before the gas was created. By measuring the change in volume, the amount of gas can be calculated.

The pressure of water vapour can be found on this webpage.