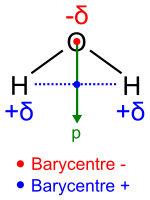 The polar bonds are symmetric, but they don't point in opposite directions. The result is a dipole (positive pointing down).

Covalent bonds can be polar or non-polar, and so can the overall compound depending on its shape. When a bond is polar, it creates a dipole, a pair of charges (one positive and one negative). If they are arranged in a symmetrical shape, so that they point in opposite directions, they will cancel each other. For example, since the four hydrogens in methane (CH4) are facing away from each other, there is no overall dipole and the molecule is non-polar. In ammonia (NH3), however, there is a negative dipole at the nitrogen, due to the asymmetry caused by the non-bonding electron pair. The polarity of a compound determines its intermolecular bonding abilities.

When a molecule has a linear, trigonal planar, tetrahedral, trigonal bipyramidal, or octahedral shape, it will be non-polar. These are the shapes that do not have non-bonding lone pairs. (e.g. Methane, CH4) But if some bonds are polar while others are not, there will be an overall dipole, and the molecule will be polar (e.g. Chloroform, CHCl3).

The other shapes (with non-bonding pairs) will be polar. (e.g. Water, H2O) Unless, of course, all the covalent bonds are non-polar, in which case there would be no dipoles to begin with.

When two polar molecules are near each other, they will arrange themselves so that the negative and positive sides line up. There will be an attractive force holding the two molecules together, but it is not nearly as strong a force as the intramolecular bonds. This is how many types of molecules bond together to form large solids or liquids. 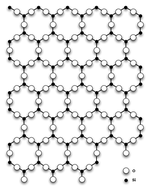 Van der Waals, or London dispersion forces are caused by temporary dipoles created when electron locations are lopsided. The electrons are constantly orbiting the nucleus, and by chance they could end up close together. The uneven concentration of electrons could make one side of the atom more negatively-charged than the other, creating a temporary dipole. As there are more electrons in an atom, and the shells are farther away from the nucleus, these forces become stronger.

Van der Waals forces explain how nitrogen can be liquified. Nitrogen gas is diatomic; its equation is N2. Since both atoms have the same electronegativity, there is no dipole and the molecule is non-polar. If there are no dipoles, what would make the nitrogen atoms stick together to form a liquid? Van der Waals forces are the answer. They allow otherwise non-polar molecules to have attractive forces. These are by far the weakest forces that hold molecules together.