From Encyclopedia of Science and Technology
< General Chemistry‎ | Properties of Matter
Jump to: navigation, search

← Introduction ·Properties of Matter/Changes in Matter →

Matter has mass and volume, as exemplified by this concrete block.

Matter is defined as anything that occupies space and has mass.

Mass is a measure of an object's inertia. It is proportional to weight: the more mass an object has, the more weight it has. However, mass is not the same as weight. Weight is a force created by the action of gravity on a substance while mass is a measure of an object's resistance to change in motion. Mass is measured by comparing the substance of interest to a standard kilogram called the International Prototype Kilogram (IPK). The IPK is a metal cylinder for which the height and diameter both equal 39.17 millimeters and is made of an alloy of 90% platinum and 10% iridium. Thus, the standard kilogram is defined and all other masses are a comparison to this kilogram. When atom masses are measured in a mass spectrometer, a different internal standard is used. Your take home lesson with regard to mass is that mass is a relative term judged by a comparison.

Volume is a measure of the amount of space occupied by an object. Volume can be measured directly with equipment designed using graduations marks or indirectly using length measurements depending on the state (gas, liquid, or solid) of the material. A graduated cylinder, for example, is a tube that can hold a liquid which is marked and labeled at regular intervals, usually every 1 or 10 mL. Once a liquid is placed in the cylinder, one can read the graduation marks and record the volume measurement. Since volume changes with temperature, graduated equipment has limits to the precision with which one can read the measurement. Solid objects that have regular shape can have their volume calculated by measuring their dimensions. In the case of a box, its volume equals length times width times height.

It is particularly interesting to note that measuring is different from calculating a specific value. While mass and volume can both be determined directly relative to either a defined standard or line marks on glass, calculating other values from measurements is not considered measuring. For example, once you have measured the mass and volume of a liquid directly, one can then calculate the density of a substance by dividing the mass by the volume. This is considered indirectly determining density. Interestingly enough, one can also measure density directly if an experiment which allows the comparison of density to a standard is set up.

Another quantity of matter directly or indirectly determined is the amount of substance. This can either represent a counted quantity of objects (e.g. three mice or a dozen bagels) or the indirectly determined number of particles of a substance being dealt with such as how many atoms are contained in a sample of a pure substance. The latter quantity is described in terms of moles. One mole is specifically defined as the number of particles in 12 grams of the isotope Carbon-12. This number is 6.02214078(18)x 1023 particles.

The fundamental building block of matter is the atom.

The red dots are protons, the black dots are neutrons, and the blue dots are electrons.

Any atom is composed of a little nucleus surrounded by a "cloud" of electrons. In the nucleus there are protons and neutrons.

However, the term "atom" just refers to a building block of matter; it doesn't specify the identity of the atom. It could be an atom of carbon, or an atom of hydrogen, or any other kind of atom.

Despite the fact that we define an element as a unique identifiable atom, when we speak, for example, 5 elements, we don't usually mean those 5 atoms are of the same type (having the same number of protons in their nucleus). We mean 5 'types' of atoms. It is not necessary there are only 5 atoms. There may be 10, or 100, etc. atoms, but those atoms belong to one of 5 types of atoms. I'd rather define 'element' as 'type of atom'. I think it is more precise. If we'd like to refer to 5 atoms having the same 6 protons in their nucleus, I'd say '5 carbon atoms' or '5 atoms of carbon'.

An element is composed of the same type of atom; elemental carbon contains any number of atoms, all having 6 protons in their nuclei. In contrast, compounds are composed of different type of atoms. More precisely, a compound is a chemical substance that consists of two or more elements. A carbon compound contains some carbon atoms (with 6 protons each) and some other atoms with different numbers of protons.

Compounds have properties different from the elements that created them. Water, for example, is composed of hydrogen and oxygen. Hydrogen is an explosive gas and oxygen is a gas that fuels fire. Water has completely different properties, being a liquid that is used to extinguish fires.

The smallest representative for a compound (which means it retains characteristics of the compound) is called a molecule. Molecules are composed of atoms that have "bonded" together. As an example, the formula of a water molecule is "H2O": two hydrogen atoms and one oxygen atom.

Properties of matter can be divided in two ways: extensive/intensive, or physical/chemical.

One important physical property is the state of matter. Three are common in everyday life: solid, liquid, and gas. The fourth, plasma, is observed in special conditions such as the ones found in the sun and fluorescent lamps. Substances can exist in any of the states. Water is a compound that can be liquid, solid (ice), or gas (steam). 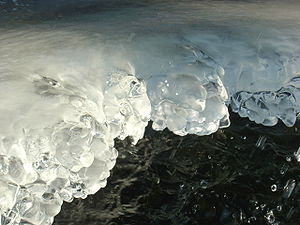 The ice in this picture is a solid. The water in the picture is a liquid. In the air there is water vapor, which is a gas.

The states of matter depend on the bonding between molecules.

Solids have a definite shape and a definite volume. Most everyday objects are solids: rocks, chairs, ice, and anything with a specific shape and size. The molecules in a solid are close together and connected by intermolecular bonds. Solids can be amorphous, meaning that they have no particular structure, or they can be arranged into crystalline structures or networks. For instance, soot, graphite, and diamond are all made of elemental carbon, and they are all solids. What makes them so different? Soot is amorphous, so the atoms are randomly stuck together. Graphite forms parallel layers that can slip past each other. Diamond, however, forms a crystal structure that makes it very strong.

Liquids have a definite volume, but they do not have a definite shape. Instead, they take the shape of their container to the extent they are indeed "contained" by something such as beaker or a cupped hand or even a puddle. If not "contained" by a formal or informal vessel, the shape is determined by other internal (e.g. intermolecular) and external (e.g. gravity, wind, inertial) forces. The molecules are close, but not as close as a solid. The intermolecular bonds are weak, so the molecules are free to slip past each other, flowing smoothly. A property of liquids is viscosity, the measure of "thickness" when flowing. Water is not nearly as viscous as molasses, for example.

Gases have no definite volume and no definite shape. They expand to fill the size and shape of their container. The oxygen that we breathe and steam from a pot are both examples of gases. The molecules are very far apart in a gas, and there are minimal intermolecular forces. Each atom is free to move in any direction. Gases undergo effusion and diffusion. Effusion occurs when a gas seeps through a small hole, and diffusion occurs when a gas spreads out across a room. If someone leaves a bottle of ammonia on a desk, and there is a hole in it, eventually the entire room will reek of ammonia gas. That is due to the diffusion and effusion. These properties of gas occur because the molecules are not bonded to each other.