From Encyclopedia of Science and Technology
< General Chemistry‎ | Properties of Matter
Jump to: navigation, search

← Properties of Matter/Changes in Matter ·Numbers Used to Describe Atoms →

Matter can be classified by its state.

Matter can also be classified by its chemical composition.

There are many kinds of mixtures. They are classified by the behavior of the phases, or substances that have been mixed. 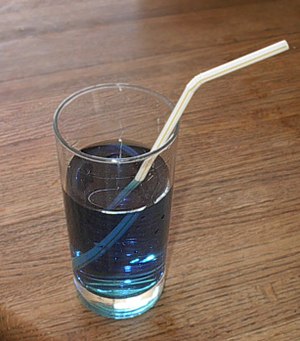 Soda water is a homogeneous mixture. (The straw looks broken because of refraction.)

A homogeneous mixture is uniform, which means that any given sample of the mixture will have the same composition. Air, sea water, and carbonation dissolved in soda are all examples of homogeneous mixtures, or solutions. No matter what sample you take from the mixture, it will always be composed of the same combination of phases. Chocolate chip ice cream is not homogeneous—one spoonful taken might have two chips, and then another spoonful might have several chips.

When different gases are mixed, they always form a solution. The gas molecules quickly spread out into a uniform composition. 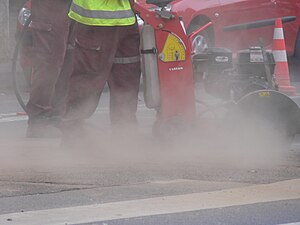 This dust is a suspension because it settles after the work is done.

When sand gets kicked up in a pond, it clouds the water. It has a greater mass than water hence it sinks to the bottom and settles down, and is no longer mixed into the water. This is an example of a suspension. Suspensions are heterogeneous mixtures that will eventually settle. They are usually, but not necessarily, composed of phases in different states of matter. Italian salad dressing has three phases: the water, the oil, and the small pieces of seasoning. The seasonings are solids that will sink to the bottom, and the oil and water are liquids that will separate. 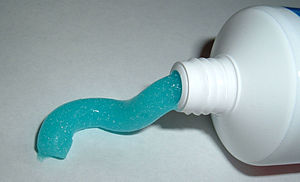 Toothpaste is a colloid, because it's part solid and part liquid.

What exactly is toothpaste? We can't exactly classify it by its state of matter. It has a definite shape and volume, like a solid. But then you squeeze the tube, and it flows almost like a liquid. And then there's jelly, shaving cream, smoke, dough, and Silly Putty...

Colloids consist of two phases: a dispersed phase inside of a continuous medium.

The Tyndall effect distinguishes colloids from solutions. In a solution, the particles are so fine that they will not scatter light. This is not true for a colloid. If you shine light through a solution, the beam of light will not be visible. It will be visible in a colloid. For instance, if you have ever played with a laser pointer, you have seen the Tyndall effect. You cannot see the laser beam in air (a solution), but if you shine it into a mist, the beam is visible. Clouds look white (or gray), as opposed to blue, because of the Tyndall effect - the light is scattered by the small droplets of suspended water.

Filtration is one way to separate a mixture.

Because there is no chemical bonding in a mixture, the phases can be separated by mechanical means. In a heterogeneous mixture like a salad, the pieces can easily be picked out and separated. It is as simple as sifting through the salad and picking out all the tomatoes and radishes, for example. However, many mixtures contain particles that are too small, liquids, or too many particles to be separated manually. We must use more sophisticated methods to separate the mixture.

Imagine you have a sandbox, but there are bits of broken glass in it. All you would need is some sort of filter. The sand particles are much smaller than the glass chips, so a mesh filter would let sand pass but stop the glass. Filtration is used in all sorts of purification methods. Some filters, like dialysis tubing, are such fine filters that water can pass, but dissolved glucose cannot. 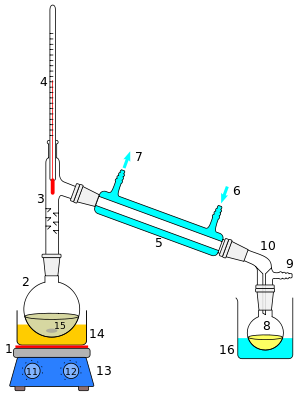 A distillation apparatus has a boiling flask, a place to cool the vapor down, and a collecting flask.

If you were given a glass of saltwater, could you drink it? Sure, if you distill it first. Distillation is the boiling of a mixture to separate its phases. Salt is a solid at room temperature, and water is a liquid. Water will boil far before salt even begins to melt. So separating the two is as simple as boiling the water until all that remains is the solid salt. If desired, the water vapor can be collected, condensed, and used as a source of pure water.

Distillation can also be used if two liquids are mixed but have different boiling points. Separation of several liquids with similar boiling points can be achieved using fractionation. 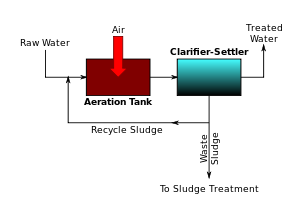 Sedimentation is used to purify waste water, by letting it settle and removing the settled material (sludge, in this case).

These processes rely on differences in density. In a medical lab, blood often goes into a centrifuge. A centrifuge is a machine that spins a sample at fairly high rates of speed. Red blood cells are much denser than the watery substance (called plasma, but it's not the plasma state of matter) that makes up blood. As a result of the spinning, the denser phases move outward and the less dense phases move inward, towards the axis of rotation. Then, the red blood cells can be separated from the plasma.

Sedimentation is similar, but it happens when particles of different densities have settled within a liquid. If a jar of muddy water is left to settle, the heaviest particles sink to the bottom first. The lightest particles sink last and form a layer on top the heavier particles. You may have seen this effect in a bottle of salad dressing. The seasonings sink to the bottom, the water forms a lower layer, and the oil forms an upper layer. The separate phases can be skimmed out. To return it to a mixture, simply shake it up to disturb the layers.

The differences in substances' properties can be exploited to allow separation. Consider these examples:

There are countless other ways to separate mixtures. For instance, gel electrophoresis is used to separate different sized pieces of DNA. They are placed into gel, and an electric current is applied. The smaller pieces move faster and separate from the larger pieces.

Chromatography separates phases dissolved in liquid. If you want to see an example, take a strip of paper and draw a dot on it with a colored marker. Dip the strip into water, and wait a while. You should see the ink separate into different colors as they spread out from the dot.