Redox (shorthand for reduction/oxidation reaction) describes all chemical reactions in which atoms have their oxidation number (oxidation state) changed.

The term redox comes from the two concepts of reduction and oxidation. It can be explained in simple terms:

Non-redox reactions, which do not involve changes in formal charge, are known as metathesis reactions.

Three components of an electrochemical reaction

An electrolysis experiment forces a nonspontaneous chemical reaction to occur. This is achieved when two electrodes are submersed in an electrically conductive solution, and the electrical voltage applied to the two electrodes is increased until electrons flow. The electrode receiving the electrons, or where the reduction reactions occur, is called the cathode. The electrode which supplies the electrons, or where the oxidation reactions occur, is called the anode.

Aqueous solutions of salts can be electrolyzed as well because they are also electrically conductive. In aqueous solutions, there is an additional reaction possible at each the cathode and the anode: 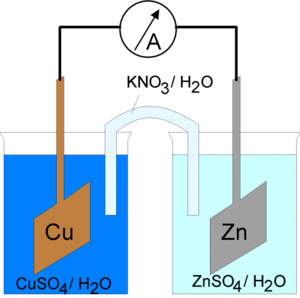 The "ammeter" at the top measures the electrical current flowing through the wire. Electrons are flowing from copper to zinc, making zinc the oxidizing agent.

A galvanic cell is constructed as shown in the image to the right. The two half-reactions are separated into two half cells. All of the reactants in the oxidation half-reaction are placed in one half cell (the anode), and all the reactants of the reduction half-reaction are placed in the other half cell (the cathode). If the half-reaction contains a metal, the metal serves as the electrode for that half cell. Otherwise, an inert electrode made of platinum, silver, or gold is used. The electrodes are connected with a wire which allows the flow of electrons. The electrons always flow from the anode to the cathode. The half cells are connected by a salt bridge which allows the ions in the solution to move from one half cell to the other, so that the reaction can continue. Since the overall reaction is spontaneous, the flow of electrons will move spontaneously through the outer circuitry from which the energy can be extirpated. The energy harnessed is useful because it can be used to do work. For example, if an electrical component such as a light bulb is attached to the wire, it will receive power from the flowing electrons.

Voltage is a measure of spontaneity of redox reactions, and it can be measured by a voltmeter. If the voltage of a reaction is positive, the reaction occurs spontaneously, but when negative, it does not occur spontaneously.